Hit enter to search or ESC to close
Pregnancy

A Dietitian’s Guide to Vitamins and Supplements in Pregnancy

By mamacare_admin September 3, 2021 No Comments 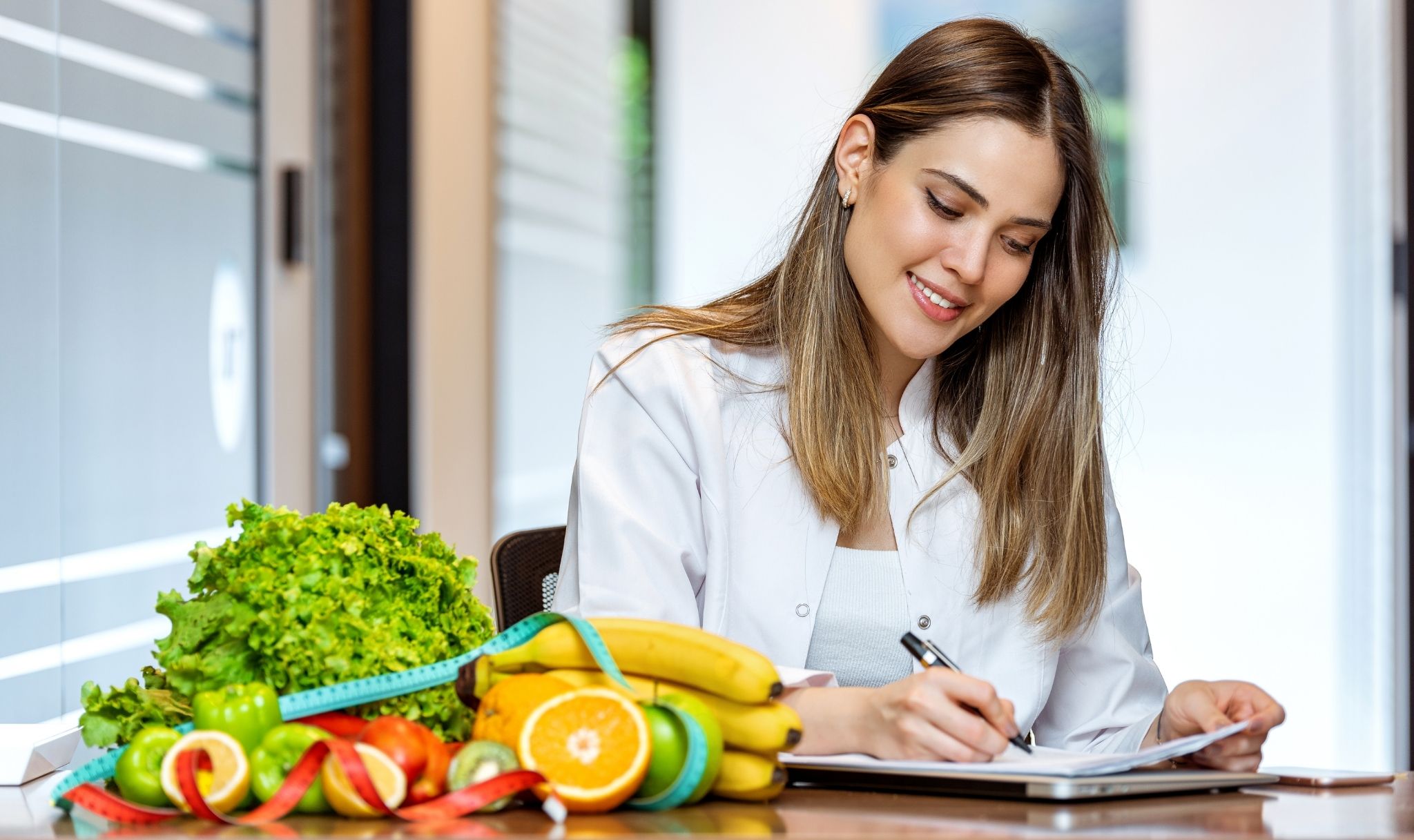 We all know the importance of a good diet, but real life can get in the way of meeting the increased nutritional requirements of pregnancy. Whether it’s being busy, feeling nauseous or pesky cravings, pregnancy can be a tough time to meet all your nutritional needs through food alone.

In fact, medical guidelines recommend supplementing two key nutrients during pregnancy – Iodine and Folic Acid – because it’s hard for diet to supply what’s needed, as dietitian Joel Feren discovered when his wife was pregnant during 2019.

“The Iron requirements are quite challenging to meet. It’s 9 milligrams a day for a male and 18 milligrams for a woman each day, but during pregnancy it goes right up to 27 milligrams a day, which can be tricky for a mum-to-be to meet,” he says.

Mr Feren worked with his wife’s obstetrician to check her iron levels with regular blood tests, and discovered that even though she went into pregnancy with high Iron stores, his wife became Iron-deficient about half-way through her pregnancy.

“I wish I had known about MamaCare, but no-one told us about it, so we used traditional supplements in tablet form,” he says. “Supplementation certainly has a role to play here, but some supplements can exacerbate nausea, which is why the MamaCare option is so powerful.”

Revised medical guidelines are now suggesting women who feel nauseous stop taking a prenatal multivitamin but continue to supplement with Folic Acid and Iodine to ensure they meet their nutrition needs.

“From anecdotal evidence, milky based drinks are often well-tolerated and can relieve nausea,” Mr Feren says.

Just as every woman and every pregnancy is different, so too is each person’s nutritional needs. General dietary guidelines are simply broad advice to apply to the majority of people, but most individuals need their nutritional requirements during pregnancy assessed by their GP, midwife, obstetrician or a dietitian.

The Australian Dietary Guidelines recommend that pregnant women eat a range of healthy core foods from the five food groups, but only add one serve of meats or alternatives and an extra two-and-a-half daily serves of grains and cereals as compared to non-pregnant women. 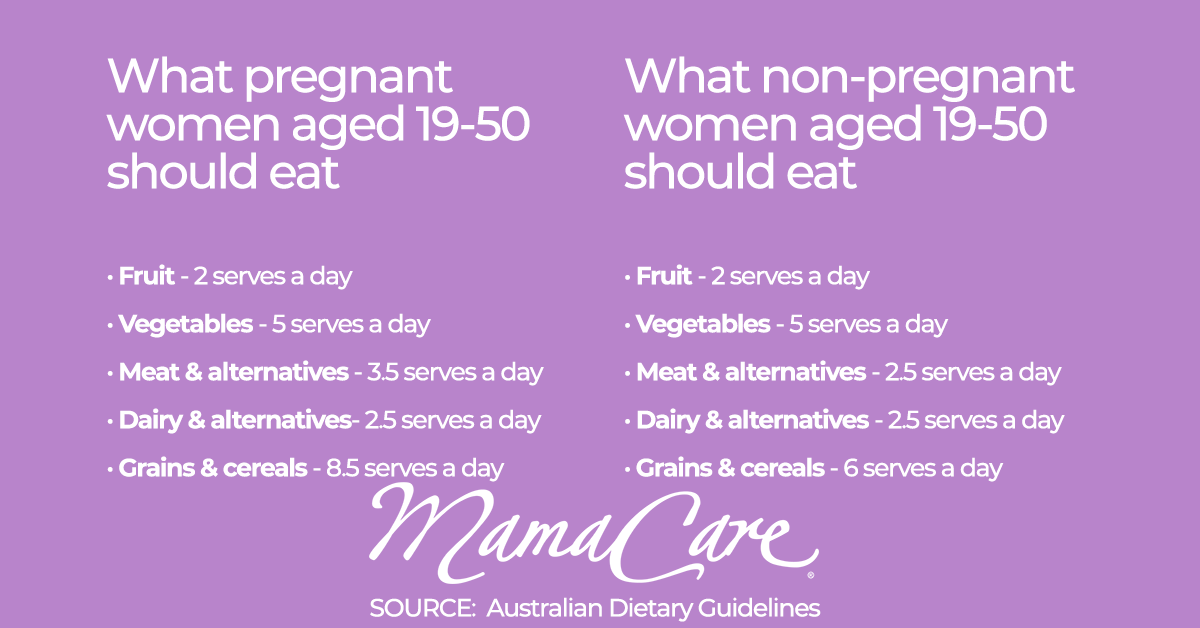 “Pregnant women definitely do not need to eat for two – they need to be strategic about what they eat,” Mr Feren says. “When it comes to eating meals during pregnancy, ensure the foods are highly nutritious and offer a broad range of nutrients. Eat a wide variety of foods – that’s the gold standard.”

The reality is that most pregnant women do not meet the dietary guidelines, which may lead to not meeting nutrient targets. 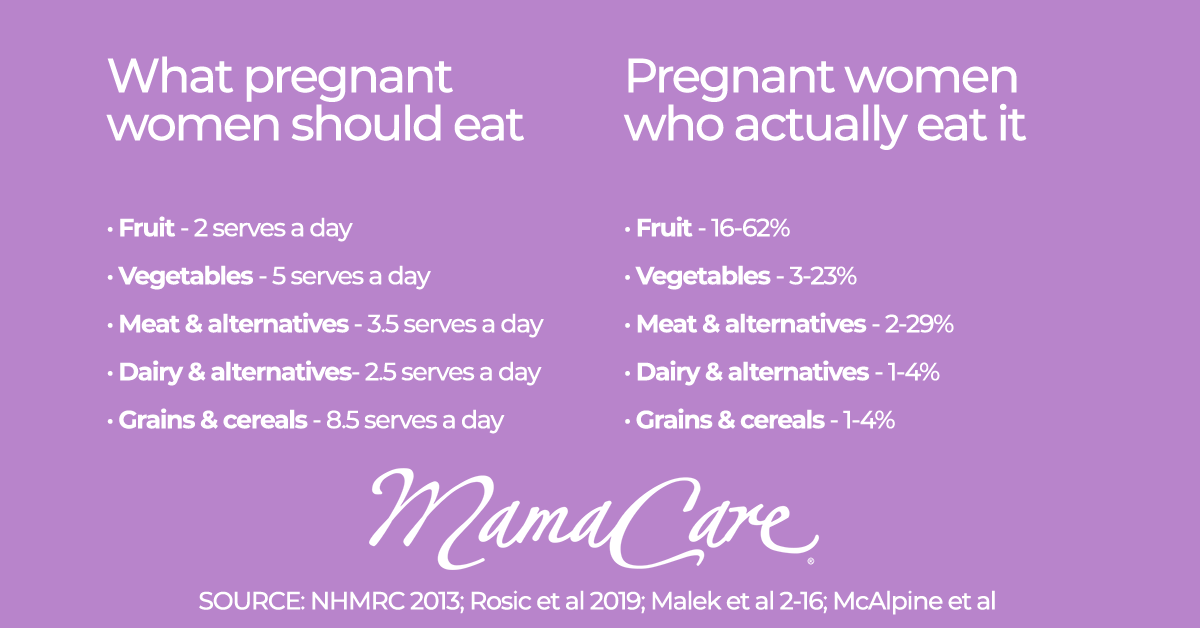 While Australian pregnancy care guidelines recommend women eat from the five food groups, they also suggest supplementing certain vitamins and minerals as they are hard to get from diet alone. Poor diets and emerging dietary trends like plant-based diets or food intolerances may leave women with nutritional gaps that supplementation can help to fill.

We’ve broken down what pregnant women need to know about good nutrition and vitamin and mineral supplementation during pregnancy.

The nutritional role of Folic Acid during pregnancy

Different sources recommend taking 400 or 500 μg of supplemental Folic Acid each day for at least one month before conception and three months after conception. Folic Acid is critical during this time period as the neural tube fuses during the early stage of pregnancy. Diets low in Folate increase the chance of the neural tube not closing properly, which can lead to a neural tube defect such as spina bifida. In Australia, there is mandatory fortification of bread with Folic Acid and the nutrient is also found in lots of everyday foods such as leafy greens, citrus, orange juice, nuts and seeds. MamaCare contains 500 μg of Folic Acid to meet nutritional requirements.

The nutritional role of Iodine during pregnancy

Pregnant women are also advised to supplement their diet with 150 μg of Iodine daily to support the mother’s thyroid hormone production and the baby’s developing brain and nervous system. Australia makes fortifying bread with Iodine mandatory to prevent deficiency as many rich sources of Iodine, such as seafood and seaweed, are not commonly eaten in this country. MamaCare contains 105 μg of Iodine to meet 70% of requirements.

The nutritional role of Iron during pregnancy

Iron is a tricky nutrient in pregnancy – requirements do increase by 50% during pregnancy to account for the increased blood volume of the fetus and placenta. Iron can also contribute to a reduction in tiredness and fatigue, a common symptom of pregnancy. However many pregnancy multivitamin tablets provide an amount far exceeding the daily requirements, which can lead to gastrointestinal upset including nausea, vomiting or constipation. The richest source of dietary Iron is red meat, poultry and fish, however the rise in plant-based eating or sensory aversions to meat mean some women’s diets may be lacking in this critical nutrient and require supplementation. Even though plant-based foods such as legumes can be high in Iron, this form of plant-based (non-haem) Iron is poorly absorbed by the body compared to the form of Iron found in animal foods. MamaCare contains 10.2 mg of Iron to meet 38% of the requirements in pregnancy. The form on Iron in MamaCare is mild on the tummy and has high bioavailability, meaning it’s well-absorbed.

The nutritional role of Calcium during pregnancy

Calcium is important for all women to maintain strong bones, however during pregnancy it is also important in developing a strong and healthy fetal skeleton. Diets high in Calcium can enhance bone mineral density, however many pregnant mothers miss out on vital sources of Calcium due to morning sickness or cutting out their daily milky coffee. Supplementation with Calcium might be a good idea if you’ve unintentionally reduced your Calcium intake. It’s important to remember doing weight-bearing exercise is also critical to maintain strong bones – this is any exercise where your bones have to bear weight, basically anything except swimming or cycling! It doesn’t have to be strenuous – just keeping up with your daily walks is great. Due to the Australian milk powder base, as well as the extra Calcium added, MamaCare provides 400 mg of Calcium to meet 40% of requirements.

The nutritional role of Vitamin D during pregnancy

Vitamin D is important for all women, not just pregnant women – it’s main role is to assist with the absorption of Calcium for strong and healthy bones for both mum and bub. While most people get Vitamin D from absorbing sunlight on their skin, the harsh rays in Australia can leave many deficient as they lather up with sunscreen or avoid the sun altogether. It’s estimated almost a third of Australians are deficient in Vitamin D, with more than 50% of women in southern states deficient during winter and spring.

During pregnancy, you may feel too sick to leave the house to soak up some rays or feel too cold to do so in the dead of winter. Women with dark skin can also have a hard time getting enough Vitamin D, as the pigment in dark skin absorbs the UV light, meaning they need three to six times longer in the sun than their fair-skinned counterparts to generate the same amount of Vitamin D. If you’re in doubt, ask your doctor for a Vitamin D blood test to see where your levels are at. MamaCare provides 6 μg of Vitamin D to meet 120% of the requirements in pregnancy.

The nutritional role of Vitamin B12 during pregnancy

Vitamin B12 is another important nutrient during pregnancy. While we don’t need a lot more during pregnancy, pregnant women tend to need a little bit more for new DNA synthesis in the fetus and placenta. Vitamin B12 also supports normal neurological function and development. Vitamin B12 is found mostly in animal products, so those cutting out meat may find themselves missing out on this critical nutrient. Similar to Iron, Vitamin B12 also contributes to a reduction in tiredness and fatigue, a common pregnancy symptom. Supplementation may be a good idea if you suspect your diet is lacking in B12 and it is safe to supplement as any nutrients not absorbed will just pass through in your urine. MamaCare provides 2 μg of Vitamin B12 to meet 77% of the requirements in pregnancy.

The vitamin and mineral supplements discussed above are all pretty commonplace, however a lot of women hear old wives tales about certain herbal supplements to support their pregnancy. Most of these are myths with unfounded evidence and some can even be dangerous in pregnancy. It’s best to steer clear of these unless directed by your doctor, midwife, dietitian or pharmacist. Some common myths to steer clear of during pregnancy are:

If in doubt, ask your doctor, obstetrician, midwife, dietitian or pharmacist before supplementing your diet with anything. Remember, dietary guidelines offer general advice only, and for personalised nutrition advice, it’s best to see a medical professional.